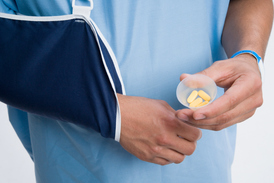 If you have been recently involved in a slip-and-fall or trip-and-fall injury, be sure to read these five important tips for victims of slip and fall injuries.
Although each slip-and-fall injury case has its unique circumstances, there are basic facts necessary to establish in order to have an injury claim that can be pursued legally:

1. Notice of Dangerous Condition. Just because you fell and injured yourself because of a certain condition on the floor, does not mean that you have a legitimate injury claim against that store. A degree of fault on the part of the store must be shown. You will have to prove that the owner of the premises knew or should have known of this condition but failed to fix it.  If you cannot show that the owner / the operator of the premises had notice of the condition for a certain period of time and failed to do what it reasonably should have done to clean or remedy the condition, or you can't show that the condition has been created by the owners or their agents themselves, you likely do not have a legitimate injury claim.

Imagine a situation where you slip and fall on a wet floor at a grocery store. The store has sweeping logs, showing that some employee walks around every hour to make sure that the floors are clean and dry. It's quite possible that some other customer spilled something on the floor a few minutes before you slipped and fell in the same area. If that's the case, then you likely do not have a negligence claim against the store operating the premises. Your attorney should be able to determine whether there is a way to show that the condition has been on the floor for a longer period of time and that the store failed to remedy that condition when it reasonable could and should.

The other situation where a claim can likely be made is an slip-and-fall on an oil spill in a parking lot of a car parts or car repair shop. Clearly, the premises owner should known that in that type of place an oil spill is likely, and if it can be shown that the area hasn't been cleaned in a while, than a legitimate claim can be made.

A compelling slip-and-fall injury case can also be made when the victim complained about the dangerous condition to the owner of the manager of the premises prior  being injured, but nothing has been done. This scenario typically happens in cases when tenants complain to landlords about a defective floor or stairs, the landlord fails to do anything to fix or unreasonable delays the repairs, and that tenant (or someone else) gets injured because of the same issue that was brought to the landlord's attention previously.

2. The Store Causes the Condition. This is a much more favorable situation to the injured claimant. Consider a situation where a heavy box falls from a shelf onto a customer's head, causing head/shoulder injury. Assuming that the box was placed by one of the store's employees incorrectly, which lead to its fall, this will likely be a legitimate injury claim against the store operating those premises. The same applies to any dangerous condition on the floor created by the store's employee, such as leaving or dropping a slippery substance on the floor, improperly placed mat, etc. Of course, proving who created the condition can be a challenge, but witness statements and videos of the area where the incident occurred can be quite helpful.

3. Extent of an Injury. Generally, slip and fall cases that result in minor injuries that resolve in a few months (i.e. contusions, and light bruising) are not worth pursuing financially. This is because the amount of work that's required to pursue and win or settle the case will often not justify the amount recovered. On the other hand, having evidence of notice and failure to repair coupled with significant injuries, such as concussion, wrist fracture or shoulder fracture,  will make that case stronger and more worthy of pursuing in court or otherwise.

A slip-and-fall can result in a serious injury, and most often to arms, wrists and shoulders. Because the density of women's bones and joints is lower than that of men, women are likely to suffer more serious injuries in a slip and fall incident. Wrist and shoulder injury means limitation or inability to work and perform typical daily duties for a period of time, among other things, especially today when a typical job - typing on a computer - requires healthy and strong arms and wrists. These challenges and losses must be taken into account when considering the overall financial value of a slip-and-fall case.

If you are presently pursuing a slip-and-fall injury case, be sure to watch the video below with a very important advice for your deposition or trial testimony, to make sure you avoid making the common mistakes that affect the outcome of many slip-and-fall cases.