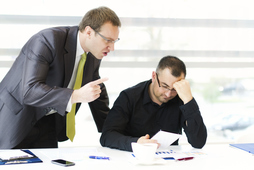 One of the most commonly misunderstood terms in California employment law is "wrongful termination". Many, if not most, employees believe that "wrongful" in the context of wrongful termination means unfair, hurtful or unjust. However, under the law, wrongful termination has a much more narrow and specific definition, and it requires evidence that the employer violated a specific law when firing an employee, i.e. due to unlawful discrimination or retaliation or for some other unlawful reason.

Wrongful Termination and At-Will Employment
If you, are an "at-will" employee, like most workers in the private sector are, this means that you can be terminated for any reason, no reason, with or without notice, as long as it's not a discriminatory or retaliatory reason. Therefore, proving a wrongful termination case in court requires showing that there was a legal violation, such as discrimination or retaliation, and not merely a conflict between an employee and his co-worker or manager, or unfair treatment, or unfair performance evaluation, or a violation of a company-employer's internal policy or some type of unjust treatment or accusation.

Many employees in California are terminated for extremely unfair reasons. This ncludes being falsely accused of poor performance or misconduct or insubordination or violation of a company policy (in some instances false accusations make give rise to a defamation claim), being written up unfairly, receiving bad performance reviews, not receiving proper guidance or training, etc... Generally, none of the above issues have legal relevance if there is no evidence that they have been motivated by discriminatory or retaliatory reasons, such as due to age, race, gender, sexual orientation, disability, religion or due to retaliation for engaging in whistleblowing or complaining about discrimination, hostile work environment, safety violations, sexual harassment, certain kinds of mishandling of public funds, and a limited number of other specific violations.

Proving Wrongful Termination
Direct evidence of discrimination or retaliation, such as a "smoking gun" document, e-mail, or text message stating "we are firing him because he is gay/black/disabled, etc..." is rarely available, although this is arguably the strongest type of evidence to support a discrimination or retaliation case. However, other types of evidence can be used in proving wrongful termination and underlying violations. These types of evidence include the timing of events (i.e. a complaint followed by termination shortly after), witnesses of statements that suggest discriminatory animus (insulting jokes, racial slur, discriminatory nicknames, etc..), a pattern of excluding one class of workers and replacing them with another class, treating employees of one class less harshly or more favorably than others, etc.. An experienced employment attorney should be able to help you assess whether you have sufficient evidence to file a wrongful termination case in light of all the specific facts of your employment and termination.

Lay-Offs and Wrongful Termination
In cases involving a lay-off, the critical question is whether it was a legitimate re-organization, or there is evidence to suggest that this was just an excuse to get rid of an employee for, again, a discriminatory or retaliatory reason. For instance, many older employees are "laid off" when the true reason for their termination is age discrimination. One of the stronger pieces of evidence that would support an age discrimination claim in this kind of situation is if the employer hires or is looking to hire a new employee shortly after the older worker is "laid off". Another typical situation where a lay-off is the employer's attempt to cover up wrongful termination is notifying an employee who is about to return from FMLA / pregnancy leave or some other type of medical or disability leave that his position been eliminated, when in fact it's not true, and someone else with a slightly different title was hired who is to perform essential the same or very similar duties. We have handled a number of cases where an employer would post a job opening on Craigslist or Monster for exactly the same position from which our older client or an employee returning from leave was "laid off"  just a few weeks after that termination.

Wrongful Termination And Permanent Inability To Work
Every case requires proving (1) liability, i.e. that the employer violated the law; and (2) damages. In most situation, the case of an employee who was terminated at the time that he was completely unable to work with or without accommodations for an indefinite period of time is not worth pursuing, because terminating that employee would not be unlawful and also would not result in any wage loss, because that employee would not be able to continue working whether or not he was terminated. Thus, the termination has no practical effect on his income. If that inability to work was caused by the employer, this can be pursued as a workers compensation injury claim, which is a separate process. If that employee, prior to termination, was subjected to discrete acts of discrimination, they will generally be only worth pursuing if there are of an unusually egregious character, involving racial slur, violence or threats of violence or provable statements suggesting ill will toward that employee because of his race, disability, sexual orientation, age. However, even in those cases, the issue of damages will still be a serious practical obstacle in pursuing that case.

Union Membership and Wrongful Termination
If you are a member of the union, and you don't have a legal claim for wrongful termination based on discrimination or retaliation, you may still be able to file a grievance for unjust discipline or unjust termination, since most union contracts provide that their members cannot be terminated unless there is just case for termination. This type of claim is brought not for a violation of anti-discrimination or anti-retaliation laws, but for breaching the union contract.  Union grievance and arbitration is a separate process that has nothing to do with any discrimination or wrongful termination claims that are filed in court. The former claims are based on violations of a collective bargaining agreement between the employer and the union, while the latter is based on violations of California and Federal law.

Members of the union who have sufficient evidence to support a wrongful termination claim, can proceed with both - the lawsuit for wrongful termination and a union grievance. These two processes are separate and independent and pursuing both routes at the same time has a number of strategic advantages.