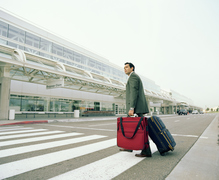 You live and work in San Francisco, and you have just been offered a great job in Los Angeles that you simply can't refuse. You relocate, and being working for that new company. Shortly after you start your new job, you discover that this new job is not what the employer originally represented to you it would be.

If the employer induced your relocation through knowing misrepresenting the nature, duration and/or compensation for your job, you might have a legitimate claim against that employer. Pursuant to California Labor Code section 970, employers are prohibited from inducing employees to change their residence to, from or within California by making "knowingly" false representations concerning (1) the kind, character or existence of the work, or (2) length of the time the work will last, or (3) the compensation for that work.

The Labor Code entitles an employee to double damages against the employer for violation of section 970. In addition, section 971 imposes criminal liability and even possible imprisonment.

In section 970 cases, the employers' attorneys usually argue that being given different work assignments from what was originally promised or contemplated is expected of the workplace. However, if an employee can demonstrated that they relocated based on an employer's representations of being given a certain role within the company, and instead, were given a different , or lesser position, and/or designated a different set of duties than originally discussed - there may be a violation of section 970.

Section 970 claim can also arise where an employee relocated after being promised a certain salary, and shortly into their new job is informed by his supervisor that he will have to take a reduction in pay.

Similarly, if an employee was promised that he would be hired for the "long term", but subsequently finds out that the company's intention was to bring him on for a single project or for a short period of time and then terminate his employment, this may also give rise to section 970 case. Thus, for instance, in Finch v. Brenda Raceway Corp. (1994) 22 Cai.App. 41 h 547, plaintiff employee was assured that the job offer to be general manager of a raceway was a permanent job, with a long- term commitment by the employer. At the same time, the company president told other employees that the plaintiff's job was temporary. Plaintiff moved from San Jose to Sonoma and was terminated after five months. The court in that case held that the evidence was sufficient to support the jury's verdict on plaintiff's Section 970 claim.

In Lazar v. Superior Court, plaintiff alleged claims of violation of Section 970 and common law fraud from representations made by defendant during plaintiff's recruitment. Plaintiff was a resident of New York, who was recruited by defendant employer in California. Plaintiff expressed concerns about leaving secure employment and moving his family across the country, and that he required that his job be secure and would involve significant pay increases. Defendant assured plaintiff that his employment would be long-term, that defendant treated employees like family, and that plaintiff would enjoy security and a strong future. Defendant assured plaintiff that the company was very strong financially and anticipated solid growth and a stable, profitable future. The employer also assured plaintiff that his division was growth division and that defendant had plans to expand it. Based on those representations, plaintiff resigned his position in New York and moved his family to California. Although his performance with defendant was exemplary,  plaintiff was terminated about two years later on the grounds that his position was eliminated due to a reorganization. In his complaint, plaintiff alleged that the representations regarding the company's financial health, his potential compensation, and the statements of long-term employment and security were false. The California Supreme Court held that the allegations were sufficient to support a claim for fraud.

On a more practical level, a 970 cause of action should clearly state the nature and exact type of damages that an employee sustained. Simply having different job duties or different management from what was expected is not sufficient to show damages significant enough to justify legal action. However, when the compensation or the nature of work are significantly inferior from the ones promised, or when what was supposed to be a permanent job turns into an unexpected short assignment, there might be a legitimate basis for making a section 970 claim.
Typically, the damages in section 970 cases included loss of wages and loss of professional reputation due to inferior duties or due to passing on other job offers or opportunities that were superior for the sake of the one in question.