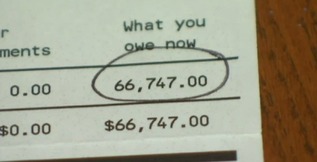 If you have significant medical bills for treatment for your injury, which were not covered by a health insurance company or a car insurance carrier, and you are stuck with the large bill that you are unable to pay, the first and the best thing you should do is contacting the hospital and explaining your financial situation to them. Then, you should discuss a mutually acceptable payment plan with them. Most hospitals are quite flexible in setting up a payment plan. They recognize and often deal with their patients' financial issues, and they would much rather be paid something every month than nothing. In most cases, the hospital would much rather have a reasonable arrangement with you than fighting you with the help of a collection agency.
Some people choose to ignore the bills, hoping that eventually the hospital will leave them alone. Although this is often true with small amounts, ignoring the bills and letters from the hospital inquiring about larger payment is not a good idea for at least two reasons: (1) This significant bad debt will likely be reported to the credit agencies, affecting your credit score, interest rates with various lenders, etc...; (2) If the amount is significant (i.e. $10k or more) you will likely be sued for the amount owed. Dealing with a lawsuit may end up costing you more than just paying off that bill over time.

If you have already been sued by the hospital and served with the lawsuit for unpaid bills, you / your attorney should contact the opposing attorneys who represent the hospital to discuss a payment plan as soon as possible. The lawsuit does not prevent you from negotiating and reaching the deal. After all, the hospital's ultimate interest is getting paid for the services provided one way or the other.