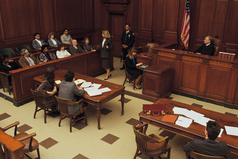 What to Expect During Your Personal Injury / Employment / Wrongful Termination Case

This page is designed to explain to Plaintiffs what to expect immediately before and after a lawsuit against an employer in a wrongful termination case or a party causing an injury in a personal injury claim.

1. Pre-filing investigation. The attorney will meet with you and gather all the relevant facts and evidence in your possessions, including documents that are both helpful and potentially damaging to your case (i.e. police report, medical records, termination letter, performance reviews, etc). The attorney might want to speak to the witnesses of any events relevant to your claim and have them sign a declaration under the penalty of perjury, which will be helpful later in the litigation process to prove the case.

It is important that you tell your attorney not only the information that favors your case but also the facts that might be damaging to your case or make it problematic - the facts that the opposing side is likely to use against you. It could be something as seemingly unrelated as your DUI, or a bankruptcy, criminal charges or past convictions, divorce proceedings that involved a public filing of serious allegations against you by your former spouse, previous lawsuits, bad performance reviews (justified or not) or warnings if it's an employment case, etc.

2. Filing a lawsuit. The attorney will draft a lawsuit and will forward it for your review to make sure that the basic facts, dates, names of the people involved and other pertinent information is correct. The attorney will then file a lawsuit with the proper court and will serve the defendants with a copy. A lawsuit is the main document that outlines the claims and the allegations that are made against the defendant and the relief sought (compensation, injunction, etc).

3. Answer by Defendants. The Defendants will have 30 days from the day of service to file an answer, which is usually a generic, boilerplate form, where the other side asserts all the possible defenses and denies all allegations. Sometimes, especially when the lawsuit travels through many sets of hands before it ends up on the desk of the defense attorney will be representing the defendant, the opposing attorneys will ask for extension to file an answer, which is routinely granted as a professional courtesy between the parties.

4. First Case Management Conference. Anywhere between four and eight months after the case is filed, the court will hold a very short case status conference or case management conference, during which the judge will ask the attorneys for both sides about the status of the case, and the progress made. The judge may set certain deadlines for completing written discovery, depositions, and other steps in litigation. The court will often also set the next status conference for a certain future date, which could be as soon as 30 days from the initial status conference or up to six months, depending on the nature of the case and the availability of the parties and their attorneys. In some counties, including San Francisco County, the first status conference may be automatically cancelled and postponed, if the parties timely submit a form statement about the progress in their case.

5. Written Discovery. Upon receiving an answer, your attorney will serve "discovery" - a set of questions or interrogatories to the other side to elicit information about the events of the case, the defendant, and any possible defenses that the defendant is likely to use in the case. Your attorney will also serve a request for production of documents that the other side might have, which are relevant to the case. In an injury case, this will include the police report, insurance declaration of the driver at fault, photos of the incident or of the vehicles involved, witness statements, and alike. In an employment case, this will include the employee's personnel file, medical records (especially in a disability discrimination case), witness lists and statements, recordings of any conversations or testimony which may serve as an evidence in the case, etc.  Another common written discovery tool is Request for Admissions, through which your attorney will make the defendants admit or deny your allegations, to determine what facts the parties can agree on early on and what facts are in dispute. The Defendant will serve on the Plaintiff similar requests for documents and questions (interrogatories) that Plaintiff will have to answer in writing under oath.

It is not uncommon for the parties to fight over information and documents that the one of the parties does not want to disclose, claiming privacy, privilege and other objections to disclosure. This is more typical in employment cases and in breach of contract cases, where issues of motive and intent are more critical than in injury cases. This is the time when attorneys bring their discovery dispute to court and where the judge decides which documents should be produce, and what can be withheld based on the case law and the rules of discovery.

6. Depositions and IME. After the parties have exchanged evidence and answered each other's questions in writing through "interrogatories", the defendant will usually take the Plaintiff's deposition, even though of course Plaintiff may be able to take the Defendants' deposition/s first. Deposition is a testimony under oath outside of court, which is recorded by a stenographer, and optionally by videotape, for subsequent use at trial. Many attorneys, including myself, consider deposition to be the most important part of Plaintiff's case. Therefore, it is well worth being well prepared for your deposition testimony. If you are my client, I will do what I can to make sure that you are ready for your deposition and that you can testify well even on the most challenging parts of your case.

In some cases, where the claimant's medical condition is at issue and contested, he will have to attend an "independent medical examination", where a doctor hired by the opposing side (i.e. employer or insurance company) will perform a non invasive medical evaluation (about 2-3 hours), upon which time he will issue a medical report about his findings, which can be used by either party in proving or disproving the claims made.

7. Possible Settlement Discussions. After the depositions, depending upon the differences between the parties about the strengths and weaknesses of their case, they parties will either engage in settlement discussions (which can also occur much earlier or much later in the case), or the Plaintiff's attorney may choose to take the deposition of defendant/s (a party causing an injury in an injury case, or the key corporate officers of the corporate employer). Many consider the Plaintiff's deposition to be one of the most, if not the most important, part of the case, so it is well worth taking the time to prepare for your out-of-court testimony, which may last anywhere between a few hours in a straightforward injury case to a whole day or several days in a complex and/or contentious employment case.

8. Pre-trial Dispute Resolution through Mediation or Other Forms of ADR (Alternative Dispute Resolution). The next step is usually referring the case for some kind of settlement conference or a mediation, where the parties meet with a neutral attorney/former judge, experienced in a given area of law, and try to reach a compromise and settle the case early, rather than face the risk and expense of trial. Many cases settle at a mediation, but not all. An attorney will prepare a mediation brief, describing the facts of your case, the applicable law, and arguments as to why you are likely to prevail at trial. The other side will do the same, but from their point of view of course. These briefs will be submitted to the mediator about a week before the mediation, to familiarize the mediator with the facts of the case and with the parties' respective positions. Mediation can take anywhere between a few hours to a whole day. Some mediations are known to go into the late hours of the evening. It is worth being patient at a mediation, and let the time do its work when helping the sides agree on certain issues in the case or recognize certain difficulties in their case, that they will confront when facing the jury.

Like any other settlement negotiations, the parties are free to mediate or use other tools to explore settlement as any time from before even filing a lawsuit and all the way up to trial. It's not rare for the cases to settle right before or even during trial.

9. Mandatory Settlement Conference. If the mediation fails, the next step is usually an MSC (mandatory settlement conference) set by court a few weeks before the trial - this is usually the last formal attempt by the court to bring the parties to the table before trial and try to settle the case. In many ways, this conference is like a mediation, except it takes place in a courthouse, in collaboration with the attorneys appointed by the court to conduct these conferences.

10. Trial. If the case doesn't settle at the MSC, the next stage is trial. Of course many cases settle literally at the doorsteps of the courthouse on the day of trial or shortly before trial. However, it's well worth being ready to go to trial from the very first days of the working on the case.
The pre-trial work includes going over the documents, the evidence, considering the strengths and the weaknesses of the case, rehearsing the testimony of the Plaintiff, the witnesses and the experts, if any, on the case. The trial involves selecting the jury out of the jury pool, making opening statements to the jury, testimony and cross examination of the parties and the witnesses and the closing arguments at the end of trial. At that point, the jury will deliberate on to decide on the verdict and then announce a verdict in an open court. The trial may last anywhere between a few days and a few weeks, depending upon the complexity of the case, the number of claims brought against the defendant, and the number of witnesses that will testify.

11. Time Commitment - generally, the time required to pursue the case is not burdensome for most people. Upon filing of a lawsuit, usually there is a period of inactivity for a few months, at which point the claimant will have to spend a few hours answering questions in writing (discovery) and producing all the documents available to support his/her case. Then, the client will have to review the documents produced by the opposing side as well as their answers to similar discovery questions. If the case proceeds further, the client will have to prepare for and testify at his deposition (anywhere from 4 hours in injury cases to up to 1 - 3 non consecutive business days in employment cases). The client will not have to appear at any court hearings except for any kind of scheduled settlement conference and for trial, if the case goes that far, as the attorney will be appearing at all the preceding hearings.

12. Costs. In personal injury cases, there are generally no upfront costs to the claimants and we only charge a contingency fee percentage, depending on the nature of the case, evidence and the stage at which the case resolves. Any costs incurred by our office are advanced and later deducted from the settlement.  In employment and wrongful termination cases, our fees are generally a combination of a small, fixed retainer fee, depending on the claimant's most recent wages, and a contingency fee. In cases of hardship, the retainer fee can be split into several monthly payments.

If you have any questions about the process above, please feel free to e-mail me at arkady@arkadylaw.com with your questions.