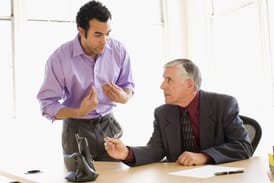 What is Workplace Harassment and "Hostile Work Environment"?

One of the most commonly misunderstood terms in California employment law is harassment or "hostile work environment". Many, if not most, people assume that if any of their co-workers or managers is literally being hostile toward them, i.e. - not being nice or friendly, or if the manager "harasses" them by disagreeing with them, or accusing them of being a bad worker, or yelling at them, or changing their hours, or job duties, or other terms of employment, or otherwise repeatedly bugging them, this makes it an unlawful harassment. In most cases, however, this type of conduct is insufficient to make a harassment claim.

Under the law, to make a harassment claim, a conduct toward an employee by another employee or manager must be (1) sufficiently severe and pervasive as to alter a reasonable person's working conditions; and (2) be motivated by a discriminatory reason. In other words, being treated badly and unfairly is not illegal unless the underlying reason is discriminatory (i.e. due to your race, age, disability, religion, sexual orientation, etc..) and there is specific evidence to connect the two by showing that the bad treatment is motivated by discriminatory reason, and not for some other personal reasons, however unfair and harsh it might be.

Thus, if your manager is rude to you or overly demanding, or if he issues you unfair performance reviews and unfounded warnings, and he does this for non-discriminatory reasons, it is not illegal unless there is specific evidence that the true reason for those actions against you is discriminatory, i.e. due to your age, race, disability, religion or a number specific, "protected" reasons. In this context, a manager who refers to an employee as an asshole does not violate the law, but referring to the same employee as an old / black / gay asshole can give rise to a harassment claim, as the discriminatory aspect of an offensive reference makes a critical legal difference.

​How you feel about the unfair and hurtful treatment that you might be subjected to and what kind of physical or mental distress symptoms that treatment causes you has very little or no relevance to making a harassment claim (although in some cases these kinds of health issues can be grounds for a workers compensation claim, which is a separate process). In other words, if your manager treats you unfairly, but his treatment has no discriminatory undertone, the fact that the manager's treatment causes you stress, anxiety, or even depression and other symptoms doesn't turn that conduct to illegal.

Isolated Incidents of Harassment Might or Might Not Be Enough to Make a Claim
Generally (although not always), a single or isolated incident, such as one or two racial or sexual jokes alone is not sufficient to form a basis for a hostile work environment claim, as the conduct must be sufficiently "pervasive", that is  - it has to be repeated. In some cases, however, a single incident might be sufficient (i.e. where the incident is sufficiently egregious and/or where the harasser is the manager, and where the demotion or termination of the victim of harassment follows shortly after the incident and is clearly motivated by that incident).   It is also important to keep in mind the "reasonable person" standard in harassment claims. That is, the courts don't rely on an employee's subjective feelings of being harassed but apply an objective standard, asking the following question: would a reasonable person, who is not particularly sensitive, find the conduct to be sufficient offensive and intolerable as to alter his working conditions. Of course, the term "reasonable" is inherently vague, which often leaves it up to a court's discretion to determine whether a particular conduct meets the standard.

Racial / Religious Harassment
This type of harassment usually involves repeated racial or ethnic slur, mockery, degrading remarks, etc. Whether a claim for unlawful racial harassment can be made depends on the (1) severity and (2) frequency of that type of behavior, as well as whether those remarks are made by a co-worker or a managerial employee.

Disability Harassment
In the context of ADA/FEHA disability discrimination, for a disabled worker to bring a hostile work environment claim related to disability, there has to be evidence of repeated verbal and physical abuse at workplace because of his disability, such as repeatedly calling him offensive names (i.e. fucking no-good cripple, etc.), repeatedly and intentionally denying accommodations, threatening with physical violence, or repeatedly denying urgent medical attention when necessary, or repeatedly making fun of the disability.

Age Harassment
Typical evidence of age harassment would include repeatedly calling an oder worker various ageists nicknames such as "father", "dad", "old times" or even "old fart", encouraging an employee to retire, and making fun of him being slower than before or slower than other employees, stating that the company needs "fresh blood" and "younger faces" or "younger ways of thinking."  All these examples are based on real cases.

There is no bright line rule as to what conduct is considered severe and pervasive within the definition of a hostile work environment claim. However, a wealth of California court decisions provide good guidance on what it takes to make an prove a harassment case. If you believe that you have been subjected to a hostile work environment or unlawful harassment, you should consult an experienced employment attorney to discuss what your legal and practical options are, as far as addressing and remedying the situation. An attorney will of course also help you determine whether there is sufficient evidence to make a harassment claim and whether it would be worth pursuing considering all the legal and practical circumstances of your situation.

Harassment By A Customer Or Another Third Party
The law protects employees from harassment by third parties as well. That conduct also has to be sufficiently severe to legally be considered harassment. For instance, if a customer or a contractor is simply trying to have a more friendly conversation and to get more personal with you, or even ask you out once or twice - that alone will not be considered harassment. On the other hand, repeated, unwelcome sexually motivated advances might be considered unlawful harassment.

Attorney's Role In Helping With Ongoing Harassment
Generally, your lawyer cannot physically stop your employer or co-worker from harassing you or treating you badly. Your attorney can, however, use a number of other legal tools to try to address the situation - from writing a firm letter demanding that harassment stops and/or threatening with filing  lawsuit, which may or may not be effective, to helping you position your case for litigation in appropriate circumstances.

What to do if you are simply treated badly, but the treatment doesn't qualify as unlawful harassment under the law?
This is a common and challenging situation, because there is no legal solution to it.  You have several options: (1) complain about the person who gives you trouble to the appropriate managers, if you believe it will help resolve the issue; or (2) start looking for another job or try to transfer to another department within the company and away from the bully, if you believe that complaining would be pointless or if it would even lead to retaliation against you (including being fired). In many other cases, there can be other creative solutions, including negotiating a severance package in exchange for resignation.