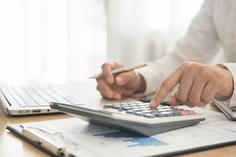 Administrative exemption is the most commonly used exemption to classify an employee as a manager exempt from overtime pay. As explained by the California Supreme Court, the administrative exemption applies to employees who: (1) are paid at least twice the minimum wage; (2) perform administrative work, defined as office or non-manual work "directly related to management policies or general business operations of his/her employer or his/her employer's customers;" (3) have primary duties that involve that administrative work; and (4) discharge those primary duties by "customarily and regularly exercising discretion and independent judgment."  - All of the above requirements must be satisfied before an employee can be properly classified as an exempt manager.

Employers are often tempted to stretch the definition of administrative exemption way too far and classify clearly low ranked workers, who should be paid hourly and be entitled to overtime pay, as exempt. We have seen all kinds of tricks used by employers to accomplish this over the past few years:
When the claim is brought in court or at DLSE for misclassification by an employee who was classified as exempt under administrative exemption, the employer has the burden of proving that the exemption applies to that employee's job duties. This provides a certain advantage to employees-claimant, in grey area type situations where both sides are not sure whether exemption applies.