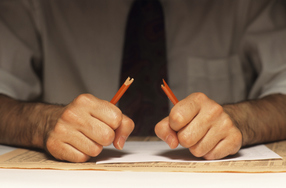 Osne of the more frustrating events that can happen at work (or with your business) is when you - an employee, a licensed professional, or a business owner - are falsely accused of incompetence, theft, fraud, overcharging, or some other crime or bad violation you haven't actually committed. This can damage your reputation in your professional community or even your community at large, your ability to find a new job if you were fired because of that false accusation, or it can really hurt your business if a client or someone else spreads false rumors about you and your business.  It's important to understand the basics of defamation law, in order to know in which situations you may have a claim for defamation:

Generally, there are two types of defamation - slander (oral false accusations) and libel (written false accusations). There is a number of strict legal requirements that need to be met in order for an employee or a business owner to be able to bring a defamation claim in court, whether it's a claim for slander or libel:

The publication or accusation must be (a) false; (b) statement of fact; that (c) damages your reputation by imputing either fraud, or crime, or infidelity, or some kind of embarrassing illness to you; and it must be published either to (d) * anyone outside of the group of "interested" persons (management and possibly other employees and co-workers) or * if it's published internally, there must be actual evidence of "malice" or ill will in that publication; (e) this publication must not be made during an official proceeding (such as in court, unemployment appeals hearing, workers comp appeals board, to the police, etc).  Thus, there are several technical requirements, as noted above, that any oral or written publication must meet in order to be considered defamatory under the law and in order to form a basis for a defamation lawsuit.

I. Typical situations that are very hurtful but do not give rise to an actionable defamation claim:

1. Your manager terminates you after accusing you of theft. A letter was issued to you, stating that you were terminated for stealing. That letter was only issued to you and a copy of it was placed in your confidential personnel file and your direct supervisor. This information was not shared with anyone else. The manager who terminated you treated you well or at least didn't have any major conflicts or unusual issues with you throughout your employment with the company except any typical issues that arise between supervisors and their subordinates. The manager relied in his decision to terminate you on his honest belief that you did steal based on statements of other employees or witnesses, or video footage, or based on some other credible evidence and / or investigation. The truth is that you haven't stolen anything. This kind of situation generally does not form a basis for a defamation claim because, the publication is internal only and there is no evidence of malice on the part of that manager. After all, his belief that you stole was in good faith and reasonable, even if it was actually incorrect.  In other words, an employer is allowed to believe accusations if they have any reasonable basis and terminate an employee on that basis, unless there is evidence that they knew the accusation were false, or unless there is specific and clear that the real reason termination is prior ill will between the employer and the accused.

3. You are terminated and are not told why. You ask your manager why you are being fired and he says "It just doesn't work out" or something else that's just as generic and vague.  You apply for unemployment benefits, which are denied, and during your unemployment appeals hearing, the employer says that they fired you for falsifying certain documents or time cards. This statement is not considered defamation because it's made during an official proceeding (i.e. a court or administrative hearing).  Unless the employer made that accusation elsewhere, outside of such proceedings, no defamation case can be brought, because statements made during official proceeding in court or in any administrative agency are generally immune from defamation claims.

4. Your customer comes in and tells you how bad of a service they received from you or they write you a nasty e-mail stating how unhappy they are with your work and how they are going to tell everyone not to do business with you. The first part of communication is not defamatory because it's an expression of opinion and not fact, and also because it's only communicated to you. The second part is not defamatory until and unless the person is acting on that threat. Merely threatening to defame someone cannot be the basis for a defamation claim. An actual oral or written publication has to occur first.

5. An opposing side testifies against you in court or any other administrative or "official proceeding" as defined by law. They make all kinds of untrue statements. However, all statements made in official proceedings are "privileged" and can't give rise a defamation case. The same applies to any other official communications, such as police reports, etc.
​
II. Typical situations that do give rise to a defamation claim:

1. You are terminated, and you find out that your former employer that fired you made the following statement to a potential employer during the reference check: "Employee X is dishonest. He used to inflate his work hours / sales figures in order to overcharge the company."  This kind of statement includes a statement of fact that accuses you of something that damages your reputation and it is published outside the interest group - to an outside entity, which is the potential future employer.

2. Your are terminated for falsifying time cards. The manager who terminated you has no reason to believe that this is true or there is evidence that he wanted to get rid of you or set you up for some other reason, or because you have a history of not getting along  with him. There is evidence of that in a form of e-mails or statements along the lines of  "his days are counted here, one way or another - just watch and see" or something similar long those lines. This can be used to prove malice and make even an internal publication actionable as defamatory.

3. One of your customers tells other customers or potential customers or publishes online some kind of writing that accusing you of being a thief or a fraud. Assuming that this is not true, you may have a defamation claim against that customer individually.

III. When a co-worker accuses you of a crime, violence, harassment, etc:

A tricky and common situation is when an employee is terminated based on his co-worker's accusations of theft, fraud, violence, harassment, etc. In this type of case, the first question is whether the accusation was actually made by the employee to the employer or was it fabricated, and no one actually complained about you. If it wasn't made, and the employer fabricated the whole story, then you might have a legitimate defamation claim. If the employer did receive a complaint, then it depends on whether they conducted a reasonable investigation before concluding whether the accusation might have been true.  If they did do their due diligence in that regard, then making a defamation claim will be a challenge, if at all possible. If reckless failure to investigate the accusations can be shown, then you might be able to make the claim.

Besides the fact that some communications, however false they might be, do not give rise to a defamation claim because they are privileged under the law, the other risk of bringing an improper defamation claim is being counter-served with an anti-SLAPP motion. If this motion is granted by a court, the employee will be charged with having to pay the defendant employer's attorneys fees.  One of the more useful cases on this issue is Olaes v Nationwide Mutual Insurance Company (2006) (file below) which is a good research starting point for any employee or attorney who wants to determine whether they are risking facing an anti-SLAPP motion before filing a defamation case.  The most  common situations in which falsities do not give rise to a defamation claims in an employment law context is statements by employees, employers or witnesses made in court or in administrative hearings (i.e. at the labor commissioner's hearing, unemployment appeals hearing, State Personnel Board hearing, etc.). The law encourages people to speak freely at these official proceedings even if their statements turn out to be false, so that they do not fear to be sued for defamation when testifying. As noted previously, these types of statements are considered "privileged".
​
A defamation lawsuit can be an effective way to vindicate the rights of a terminated and/or defamed employee and lead to a substantial settlement or trial verdict. However, it is critical to evaluate the potential claim against all of the above-referenced elements in order to make sure that your claim is viable and you won't spend a lot of money and many hours of work before you find out months or longer down the road that you don't have a case because one of the technical elements is missing, or worse -  having to deal with an anti-SLAPP motion.