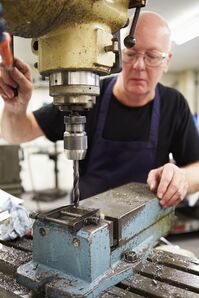 To initially make a claim for age discrimination, the employee-victim has to show that (1) at the time of termination or another significant adverse employment action (i.e. demotion, transfer to a much less desirable position, etc.) he was over 40; (2) an adverse action was taken against that employee; (3) at the time of the adverse action (i.e. termination) the employee was satisfactorily performing his job, and (4) that employee was replaced in his position by a significantly younger person, except where there is a reduction in force. (Hersant v California Dept. of Social Services (1997)). Some people, including employers, misunderstand the above and believe that as long as they replace an older worker by someone older than 40, no age discrimination claim can be made. This is inc

I strongly believe that age discrimination claims against employers will be on the rise in the future. This trend will occur for various reasons, including the pressure to cut costs by replacing senior workers with younger and cheaper force,  a (false) perception that younger workers are stronger, healthier and more reliable, and the need to have a "prettier" workforce, especially in those positions where looks really matter (i.e. sales). The other reason that employers will continue to be tempted to violate the law by firing older workers is because age discrimination is relatively hard to prove.

​The good news for older employees who are being discriminated because of their age is that making a case is possible even when employers may think they can get away with it.  We have been seeing the same termination patterns over and over which have a strong indication of age discrimination, including:
It's important that the facts of your termination are carefully analyzed in order to determine whether there is sufficient evidence to prove that age discrimination was the true reason for your termination, and that you weren't terminate for one or more other, non unlawful, reasons - however unfair or incorrect they may be. Remember - in most cases it's not illegal to treat or terminate an employee for unfair or unjustified or even false reasons. It's only illegal to discriminate or retaliate based on protected class or activity.

An age discrimination case can lead to a significant liability and recovery in and out of court because of the potential emotional appeal of those kinds of cases, especially where that older worker worked for the same employer for 20 or more years, and where the employer is a large company which is expected to know better than cover up discrimination with untruthful or exaggerated stories.

If you haven't been terminated yet, but you have a good idea that your employer is trying to replace older workers with younger and your turn of being fired and replaced is coming soon, be sure to read our article on how to enhance your potential age discrimination claim before you are fired.