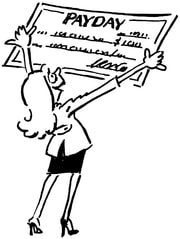 Section 203 of California Labor Code establishes that if an employer willfully fails to pay wages to an employee as due, without the abatement or reduction, in accordance with Labor Code section 201, the wages of the affected employee shall continue as a penalty from the due date at the same rate until paid, up to a maximum of 30 calendar days. this penalty is referred to as "waiting time penalty".

The reason for this penalty are to encourage full and prompt payment of wages by employers to their employees. "Willful" as used in section 203, does not require malice or blamable conduct on the part of the employer, but merely that the failure to pay was intentional. International as defined by the law does not mean with evil intent, but simply that the employer knows, or should have known, that the wages in question were due and fails to pay them. Therefore, in many cases where an employee is misclassified as a contractor, and who gets paid for his work much later than a typical employee would because of being misclassified, the waiting time penalties would be imposed by DLSE when the claim for misclassification and waiting time penalties is brought.

Here is are a few examples to illustrate how waiting time penalties work:

(a) An employee who makes $100 a day is terminated and issued his final paycheck 10 days later. That employee is due $1000 in waiting time penalties in addition to his actual final pay. This is based on $100 daily rate of pay times 10 days of delay.

(b) An employee who makes $100 a day is terminated and issues his final paycheck 3 months later. That employee is entitled to $3000 in penalties, based on $100 daily rate of pay times 30 days, which is a maximum allowed to accrue as penalty, regardless of what the delay is. This doesn't include any pre-judgment interest accrued if a case is filed in court or DLSE.

(c) An employee who makes $100 / day resigns without notice. He is issued his final paycheck 5 days later. That employee is due $200 in waiting time penalties. In this case, the employer issued the final pay two days later than the 72 hour applicable deadline, so the penalties are $100 x 2.

This law  contemplates that the penalty shall be enforced against an employer who is at fault. It must be shown that the employer owes the debt and refuses to pay it. However, to be at fault within the meaning of the statute, the employer’s refusal to pay need not be based on a deliberate evil purpose to defraud an employee of wages which the employer knows to be due. As used in section 203, ‘willful’ merely means that the employer intentionally failed or refused to perform an act which was required to be done.” Barnhill v. Robert Saunders & Co. (1981) 125 Cal.App.3d 1, 7. Similarly, in Davis v. Morris (1940) 37 Cal.App.2d 269, 274  the court explained, “ ‘In civil cases the word “willful” as ordinarily used in courts of law, does not necessarily imply anything blameable, or any malice or wrong toward the other party, or perverseness or moral delinquency, but merely that the thing done or omitted to be done, was done or omitted intentionally. It amounts to nothing more than this: “That the person knows what he is doing, intends to do what he is doing, and is a free agent.”