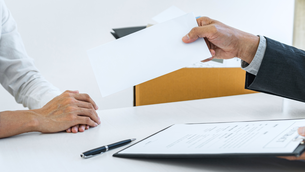 Below are eight practical factors you should consider when terminating an employee in order to minimize the risks of being sued by that emploeyee:

1. Consult with an attorney about whether terminating a specific employees creates a significant risk of a lawsuit. Just because you think that the termination is lawful, doesn't mean that the employee in question will not try to make it look like the termination was discriminatory or retaliatory due to the circumstances surrounding his termination. The most typical example of this is termination that follows that employee's protected activity, such as filing a worker comp claim, requesting an accommodation to a medical condition or medical leave, or complaining about unlawful harassment or discrimination at workplace.  Often, the close proximity in time between the termination and those types of events creates inference of retaliation, that isn't that easy to refute. Your attorney should be able to advise you on how risky it would be for you to terminate a particular employee.

2. Document employees' performance issues contemporaneously. It's much easier to justify termination with the documentation showing performance issues that was generated around the time when each of those issues took place. On the other hand, creating that documentation after the fact and right near the time of termination can suggest that there is more to the story than what the employer claims, especially if it appears that the employer not only tolerate these issues for a long time, but didn't even care to address them at all.

3. Notify the employee of his termination the right way. Many conflicts and claims occur simply because the employee feels that he has been disrespected by the employer during the termination process. For instance, terminating an employee by text message is not a good idea, especially if it's a long-time employee that spent several years or longer working for your company. Terminating in person or at least on the phone is a much better way to terminate, because it shows minimum courtesy that many people who are fired believe they deserve. If you prefer to terminate by e-mail, makes sure that the e-mail you send isn't unnecessarily harsh. The law doesn't require you to go into great detail in your termination notice, so often simply stating "We are forced to terminate you because of multiple (performance) issues" should be sufficient.

5. Do not disrespect your employee during the termination meeting.   The law doesn't require you to provide reasons for termination. However, it's still a good practice to provide an honest reason for termination. However, if the reason for termination is performance, you don't need to go overboard and harshly criticize your employee. It's sufficient to simply tell him that he is terminated due to insufficient performance. You don't need to tell him that he is a horrible worker, or that he is the worst employee you ever had, etc... Again, this type of aggressive approach will only anger your employee and will encourage him to fire back at you by filing some type of claim. Be nice and civil to your employee. Terminating meetings are not easy on anyone, and especially on the worker who is told that he no longer has a job. There is no reason for you to make it harder, even if you had a nasty conflict with that employee and you fee the desire to punish him. Rise above these emotions and be professional. If the employee verbally attacks you during the termination meeting, do not feel the need to attack him back or engage in some kind of verbal altercation.

6. Pay all wages due immediately upon termination. Ideally, you should be handing the final check to your employee during the terminating meeting, as per labor code, except for any commission pay that he might be due but which will only fully accrue at a later date, once it's earned. Paying the  terminated employee's final wages promptly will help you avoid expensive claims for waiting time penalties associated with delays in issuing that final pay.

7. Consider issuing the terminated employee severance in exchange for executed release of all claims. Although not always, in many cases it is worth offering some type of severance to an employee you are terminating in exchange for having a peace of mind of not having that employee come back and sue the company for wrongful termination or any other type of more or less questionable claim. This is particularly important in situations, where the employee you are about to terminate makes an impression of someone litigious and likely to file some type of claim.

8. In most cases, you shouldn't be challenging the terminated employee's application for EDD unemployment benefits. A terminated employee is generally entitled to unemployment benefits unless he was terminated for "misconduct" which is a substantial and willful violation of company policy, or another clearly serious offense. Most terminations due to substandard performance, negligence, etc.. do not meet that standard, so there is no reason to oppose the terminated employee's claim for benefits. When you try to stand between that worker and his ability to receive the most basic income while searching for a new job, you are also increasing the chances of him looking for reverenge against you, where he otherwise would have focused more on looking for a new job.